BLINK: The Power of Thinking Without Thinking

This book is a good read because it talks about things that you don’t necessarily “learn” in training programs–but rather is something that you need to develop for yourself. This book is about making important decisions based on experience, intuition and intelligence–all within the “blink” of an eye!Gladwell calls this process “Rapid Cognition,” and as he says on his website, he doesn’t ever actually use the word “intuition’ because that suggests something on an emotional or gut level–something almost “not rational.” He believes those first few seconds are actually perfectly rational–just thinking at a faster rate. This idea is something that is a core characteristic to achieving success in Executive Protection, and makes for a fascinating read!

Here is an excerpt from the book:

Imagine that I asked you to a play a very simple gambling game. In front of you, are four decks of cards–two red and two blue. Each card in those four decks either wins you a sum of money or costs you some money, and your job is to turn over cards from any of the decks, one at a time, in such a way that maximizes your winnings. What you don’t know at the beginning, however, is that the red decks are a minefield. The rewards are high, but when you lose on red, you lose a lot. You can really only win by taking cards from the blue decks, which offer a nice, steady diet of $50 and $100 payoffs. The question is: how long will it take you to figure this out?

A group of scientists at the University of Iowa did this experiment a few years ago, and what they found is that after we’ve turned over about fifty cards, most of us start to develop a hunch about what’s going on. We don’t know why we prefer the blue decks. But we’re pretty sure, at that point, that they are a better bet. After turning over about eighty cards, most of us have figured the game out, and can explain exactly why the first two decks are such a bad idea. This much is straightforward. We have some experiences. We think them through. We develop a theory, and then finally we put two and two together. That’s the way learning works. But the Iowa scientists did something else, and this is where the strange part of the experiment begins. They hooked each gambler up to a polygraph–a lie detector machine–that measured the activity of the sweat glands that all of us have below the skin in the palms of our hands. Most sweat glands respond to temperature. But those in our palms open up in response to stress–which is why we get clammy hands when we are nervous. What the Iowa scientists found is that gamblers started generating stress responses to red decks by the tenth card, forty cards before they were able to say that they had a hunch about what was wrong with those two decks. More importantly, right around the time their palms started sweating, their behavior began to change as well. They started favoring the good decks, and taking fewer and fewer cards from A and B. In other words, the gamblers figured the game out before they figured the game out: they began making the necessary adjustments long before they were consciously aware of what adjustments they were supposed to be making. 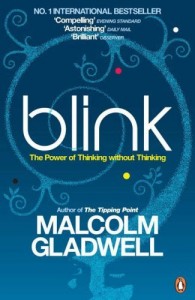