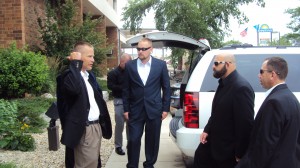 Have not had an opportunity to post this week’s feature article. Reason being, I’ve been asked by the staff at The Executive Protection Institute to come out, an observe their training. So I’m posting a blast from the past, Mindset Re-Orientation: A Critical Component of Protection Training By Rick Colliver. Enjoy!

Having been involved in the training and selection of protection personnel over the years, I have learned that everyone brings something valuable to the table in the way of their professional experience. As a matter of fact, my co-instructors and I learn something new from the students throughout each class, and if we like a particular technique or learned about a new study or process, rest assured it will be included in the next program.

We recognize that many of the individuals who take principal protection training have already completed training in traditional police, military or martial arts subjects and may be eager to share these techniques with the class, or to build them into their professional tactics tool box. We also appreciate that the people who attend protection courses are energetic, involved and ready for action. However, in order to assure that everyone starts from a level playing field we have found that it is important to isolate some fundamental differences between protection work and traditional police, security and martial arts concepts.

Traditional experience and ego get in the way

Many of us have mainstream law enforcement or security jobs and only work protection details part-time or on an itinerant basis when assigned special duty for a public event or visiting dignitary.  Once this detail is over, we will go back to investigating crime, patrolling streets, or managing general security functions. But, let’s be honest – fifteen years of chasing tail lights up the freeway may be a prerequisite for assignment to a governor’s protection detail, but it in no way prepares us for it.

We may have been great at spotting stolen cars and dope smugglers, but the field of protection is going to be something new for us. When we add into this mix the idea that we work in a career path where our egos are often second only to doctors…well, maybe lawyers too…we can see where professional pride could potentially impede the learning process. We need to communicate to our students early in the class, that this is new stuff and may appear contrary to some of the things they’ve been taught for the past ten or twenty years.

Throughout most of our careers, we have been trained to respond to an aggressor who is advancing directly on us. In protection work we have to re-orient our defensive thinking and posture to an attack that will be launched and directed tangential or obliquely to our position. The weapons strips that we learned in the police academy now have to be modified to allow for use at a variety of angles, other than frontal. Similarly, blocks and strikes must be practiced from left of, right of and behind an assailant, as this assailant is moving perpendicular to, parallel to or away from us. In some cases, even though we know the person to be armed, we may not see the weapon when we launch our defensive strike.

Stepping “in” to the line of attack instead of “off”

Most martial artists and firearms instructors teach that when we are drawing, reloading, clearing stoppages or just plain fighting, that we need to move frequently and step off our adversary’s line of attack. If we are standing in one place, where our adversary expects us, we are easy prey. However, in protection work, we have to recondition ourselves to step “in” to the line of attack. An attack is being launched at an individual that we are paid to protect and this means that we must practice getting between the adversary and the target as quickly as possible.

Properly executed from a low-profile position, this can actually work to our advantage, since a target-fixated adversary may not be expecting a counter-attack from his or her flank. However, those same defensive skills that we have practiced through the years must now be modified to be consistent with a variety of attack scenarios.

We are raised in traditional law enforcement training to come to the aid of our fellow officers and co-workers. For our police readers out there, picture a spontaneous robbery attempt at a neighborhood convenience store. If 3-4 officers happen to be in the parking lot chatting when another officer confronts the robbery suspect inside, who resists…what will their response be? Of course – this is why we became cops! We are all going to get a piece of this action.

But again, in protection work we cannot afford to have our attention misdirected by an AOP that might only be a diversion. Our principal mission is to prevent intentional and unintentional harm to the Protectee and that means our detail must focus on covering and evacuating. Thus, the agent closest to the attack must neutralize it, while everyone else goes a different direction.

Goal is to interrupt, not apprehend;

While the “agent closest” is responding we have to remember that we didn’t just throw him or her under the proverbial bus. We don’t have to go five rounds in the cage with our adversary; we just have to interrupt the attack and give the detail a few seconds to remove the Protectee from the source of danger. In many venues, we won’t have powers of arrest anyway, but if we have done a good job on our advance, there should be uniformed security or police personnel close by to assist. If not, in any crowd, there can usually be found well-intentioned spectators who will try to help…leading us to the last category.

We won’t be first

Statistically; well-meaning, but untrained bystanders will get to the potential assailant before anyone on the security detail. If we look back at some key assassination attempts, we can see evidence of this.

On the evening of February 15, 1933 Giuseppe Zangara attempted to assassinate FDR at Bayfront Park in Miami. Standing on a folding chair, he pushed a .32 revolver out over the heads of other spectators and as he began to fire, a woman named Lillian Cross grabbed his arm, causing his shots to go off target. She and another spectator, Thomas Armour, were able to restrain Zangara before police and Secret Service agents could get to him.

Oliver Sipple was a US Marine (Viet Nam veteran) who subdued Sara Jane Moore before she could fire a second shot at POTUS Gerald R. Ford as he emerged from the St. Francis Hotel on September 22, 1975. Sipple and Moore were in a crowd of onlookers across from the hotel entrance, about forty feet from the President. Sipple later received a commendation from President Ford for his actions.

Most recently, on March 30, 1981, it was Cleveland native Alfred Antennucci who first saw John Hinckley raise his gun and begin to fire on President Reagan and three others outside of the Washington Hilton. Antenucci struck Hinckley in the head, possibly interrupting his aim and focus, before police and Secret Service agents could apprehend him.

The moral of this story is that, as the agent-closest wades into the fray, they should expect to have to negotiate around bystanders who may mean well, but haven’t the skills to safely disarm an assailant or neutralize the attack. In an AOP, emotions and adrenaline dump will be high, and while there may only be one weapon, there could be many hands upon it.

Train to the Mission

Protection personnel are encouraged to train with their peers as often as possible, using a wide variety of AOP scenarios as a guide to develop new, and easily demonstrable techniques. To avoid injuries, teams should work with competent trainers and practice techniques slowly at first – gradually building speed as the techniques become second nature. Training gear should be modified for our purposes, such as grinding off trigger guards and polishing sharp edges on ASP/Rings training guns, so that we don’t spend more time in the emergency room than we do on the mats.

Before shooting techniques are practiced on the range, I recommend that they are first demonstrated by the instructor and then practiced with Airsoft or Simunition prior to being undertaken with live ammunition. We have to be fast, good and able to shoot from unusual positions while holding onto and giving instructions to a human in crisis. Even though we all know that if we have to pull a firearm in a protection role, we’ve probably already lost the first round of the fight, it is nevertheless essential that we practice a protection mindset when practicing defensive techniques.

Train early and train often!
——————————————————
Rick Colliver has served as the global security director for two multi-national corporations with operations in 24 time zones, and has managed protection details in Europe, Africa, Asia and the Americas. He is the course developer and lead instructor in the Principal Protection program at the Ohio Peace Officer Training Academy and is an adjunct instructor in protective operations through several police, military and academic organizations. His book, “Principal Protection; Lessons Learned” is ready for publication in spring 2011.