You are here: Home / Archives for Featured Articles

1 : firm adherence to a code of especially moral or artistic values:

3 : the quality or state of being complete or undivided: completeness

Contrary to the dictionary’s definition, as a general rule, when working in the area of personal or executive protection, the word “integrity” is more aligned with the word “loyalty.” This can cause problems if you are an especially moral person who will be greatly bothered by the less-than-honest behavior of the principal under your protection.

From the perspective of the private life of your principal, he or she is entitled to complete and absolute confidentiality, which may or may not “fit” with your personal code of ethics or morals.

Here’s an example: You are protecting a celebrity principal. Let’s call him Mr. Brown. In the course of an evening out on the town, your boss tells you to take him to an address that belongs to a young woman who joins him in the back seat of the limo, for a brief or a lengthy period of time. A few hours later the detail heads for the principal’s home and the interim shift takes over.

END_OF_DOCUMENT_TOKEN_TO_BE_REPLACED

You finally get the nod from your supervisor; after months of doing “halls and walls, (standing posts), you are going to perform your first Protective Security Advance. In other words, you have been designated to proceed ahead of the principal’s security detail and will be charged with protecting your company’s principal and liaison with officials at each of the sites he will be visiting. In this case, let’s assume your principal is a CEO of a firm headquartered in Chicago but he will be traveling to New York City to attend a three-day conference. Generally, especially in government protective security organizations, an advance is completed by a team of agents; however, in this case you work for a moderately sized private sector company and this particular principal is frugal and is attempting to acquire top notch security on the cheap.

First, although your agency’s travel representative should already be aware of your detail’s itinerary, it is normally the responsibility of the detail leader to inform the travel office that agents, or an agent, will be traveling in advance of the detail. However, it is a good idea to contact your firm’s travel agent to ensure they have taken the appropriate steps concerning appropriate air travel, rental car reserved for you at the correct NYC airport, and hotel reservations for the entire time frame you will be in the Big Apple. Generally, you will need about three to four days to advance the detail’s itinerary, and the same number of days the protection team will be on the ground. Not only will you advance each site prior to arrival of the detail in New York, you will then hop and skip from site to site advancing each one and in essence staying one step in front of the security unit.

END_OF_DOCUMENT_TOKEN_TO_BE_REPLACED 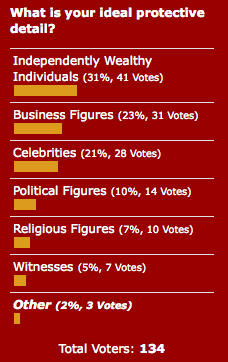 This list appeared at executive-protection-news.com, and I thought it might be worthy of further examination. If you are considering this career, ask yourself if you possess these qualities, because you’ll put every one of these into use on the job!!

Top 10 Traits To Succeed As An Executive Protection Specialist:

I hope that when Bruce Alexander (a top-notch pro in this business) posted this on his web site that newcomers took the time to print it out and to study it–because even with all the training in the world, all the skills with weapons, all the passion–if these traits aren’t aspects of your character, you’re going to have a tough time in this business. Your disposition and attitude are equally as important as your job skills.

I’m sure that my colleagues would agree that there is a certain “mystique” to the Bodyguard and Executive Protection industry. It is a world that can be somewhat shrouded in secrecy, and unfortunately, impressions of this business can be formed based on what the public sees on television and in the movies. In the interest of getting to some truth about this business, I thought it would be interesting to share some real world information that might help those who are interested in this career to understand that what is portrayed in the media is not always the whole (or realistic) picture.

Just to be clear, there are several terms that are used and are somewhat interchangeable for “Executive Protection Specialist.” They include: CPO (Close Protection Operative), and also “Bodyguard.”Â  Wikipedia describes a bodyguard or EPS as: a type of security guard or government agent who protects a personâ€”usually a famous, wealthy, or politically important figureâ€”from assault, kidnapping, assassination, loss of confidential information, or other threats.